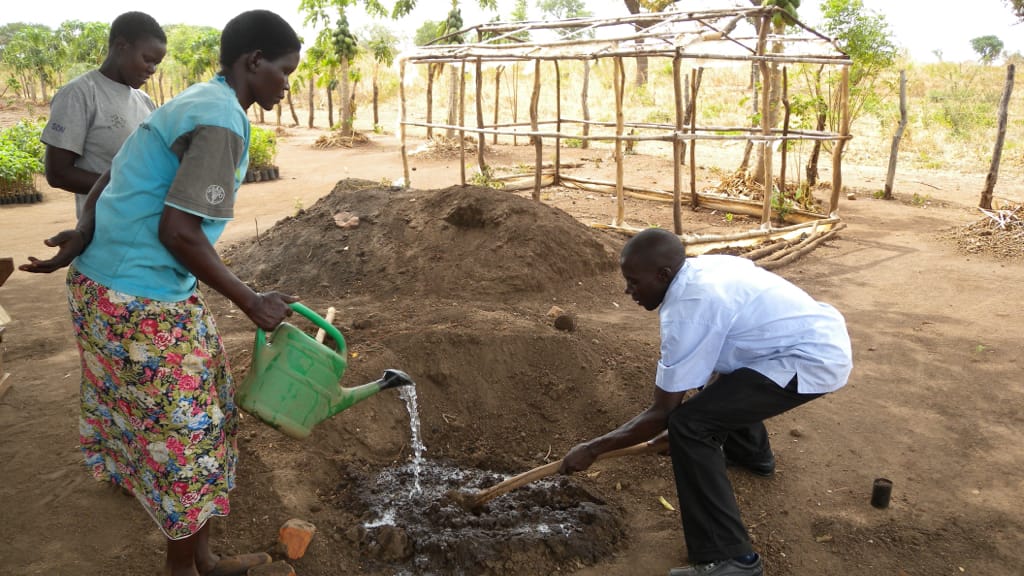 This project restored the environment for returnees in villages and primary schools in Kitgum and Lamwo districts in Uganda. Fifty households and four primary schools were supported to establish and manage wood lots, orchards and vegetable gardens. The project empowered the local community to set up sound environmental conservation practices, improve practices in modern farming, as well as identifying opportunities for income generation to improve their livelihoods.

During the 20 year civil war in Uganda, over 90% of the residents in Kitgum were displaced and living in the main IDP camps, so the land was left bare as bushes were indiscriminately cleared for firewood and building materials. In Northern Uganda alone, over 70% of local forest reserves were lost, which lead to severe soil erosion. Degraded land results in reduced agricultural productivity and this was threatening the livelihoods of the vast majority of the rural poor in Northern Uganda, who rely on agriculture for their livelihoods.

The project supported school eco club activities to disseminate information about environmental conservation practices through dramas and competitions. Members of the eco clubs, teachers, and environment committees participated to monitor the progress of the woodlots, orchards and vegetable gardens established by selected schools and households. In addition, the project supported communities with inputs such as modern bee hives and training in apiary management and marketing to improve livelihoods.

Lutheran World Foundation (LWF) has been supporting communities in Kitgum and Lamwo districts to rebuild their livelihoods in the return process. From July 2008, the LWF environmental conservation project supported communities to replenish the degraded environment by building the capacities of the various stakeholders in their villages of origin and IDP sites. REI first supported LWF in 2008, funding this area of work.

In Uganda, approximately 97% of rural households rely on biomass for energy as they do not have access to grid electricity. Ugandan forests were disappearing at an alarming rate of two percent per year and in the last 25 years, the country has lost almost a third of its forests. The Food and Agriculture Organisation (FAO) warns that more than 80% of Uganda could become a desert in less than 50 years if the present environmental degradation is not reversed.

The project trained 26 teachers from 14 primary schools on tree planting and management, as well as vegetable production. The teachers used their knowledge to establish school woodlots, orchards and vegetable gardens which were taken care of by the schools ECO-clubs. There were 560 members in the ECO-clubs (288 boys and 272 girls).

In addition the project supported ten families by providing two pigs each (female and male), and gave training in piggery management and production.

“I used to tether my one pig but after the training, I constructed a piggery house. I bought three more pigs. My family supported the project and usually helped in feeding the pigs,” Obita reported.

Additionally, ten individuals were trained as beekeepers, learning honey harvesting techniques and processing and marketing, common problems affecting beekeeping and environmental conservation practices. They were supported with both beehives and harvesting gears.

“I sold five kilograms of raw honey at local market and bought books for my children and used part of the money for domestic needs,” said Odong during a routine home visit.