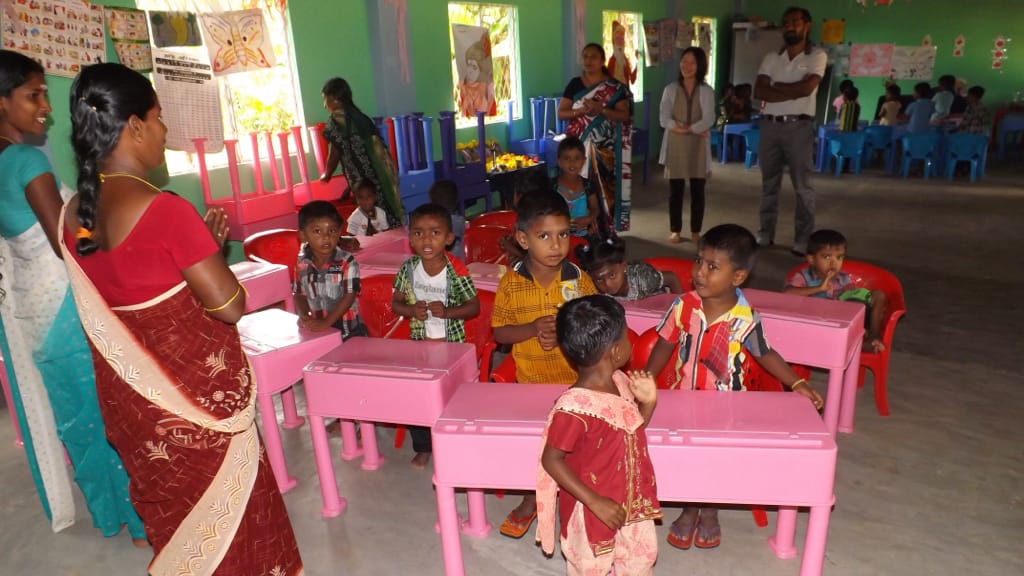 This project enhanced the quality of preschool education in the newly resettled areas of the Mullaitivu District, Northern Sri Lanka by supporting preschool teachers in achieving their diplomas. The teachers were returnees themselves whose lives have been affected by conflict, and thus this project provided them opportunities for higher education that had previously been limited.

The Teachers’ Diploma Course project supported 114 preschool teachers as direct beneficiaries and 1600 preschool students as indirect beneficiaries. World Vision Sri Lanka (WVL), WVJ’s sister agency, and the local Education Department Committee selected the teachers, to undergo 360 hours of training (Saturday and Sunday, 6 hours/day). The majority of the teachers are female, as this is one of few professions that women can take on in Tamil culture. The project promotes sustainability by training and certifying teachers to the Sri Lankan government standard.

During the protracted civil war between the Sri Lankan Armed Forces and the Liberation Tigers of Tamil Eelam (LTTE) many areas like Mullaithivu saw no progress in preschool education in those lost decades. Teachers were not allowed to get certification despite having taught for years. The area remains the most vulnerable of resettlement areas due to the extent of damage.

The Sri Lankan civil war lasted nearly 30 years, leaving an estimated 80,000 – 100,000 dead. In 2004, the Indian Ocean tsunami struck the island and created further havoc. In 2008, the ceasefire between the two belligerents eroded and the Sri Lankan Armed Forces launched a military offensive from September 2008 onwards that eventually led to the Government’s military victory over the LTTE in May 2009. Although the civil war ended, many areas of Sri Lanka are still very vulnerable.

The project will be implemented by World Vision Japan (WVJ). WVJ has been assisting Sri Lanka’s developmental efforts since October 1991, and has successfully implemented many projects mainly in Southern and Eastern part of the country.

Out of the 114 teachers that took part in the diploma, 89 teachers passed the exams, completed the 2 semesters (with courses ranging from Child Psychology to Creative Studies) and kept a mandatory attendance rate of 80.

Many of the teachers have improved their competencies and have felt a direct benefit from the course such as overcoming shyness or developing leadership skills.

Through the training teachers said they were made aware of the importance of learning theories and can more easily identify and help children who have psychological issues.

M. Malarchelvy (39) is one of the pre-school teachers who completed the diploma course supported by REI. She has been working in the same pre-school for 15 years in Maritimepattu, Mullaitivu District of Sri Lanka. “When we started applying at pre-school what we learned in the diploma course, children also started showing very clear changes. We have received some feedback from primary school teachers and principle. They amazingly say that the children who admitted to primary school this year are very different from previous ones. They are very active, positive, quick to respond and emotionally stable”.