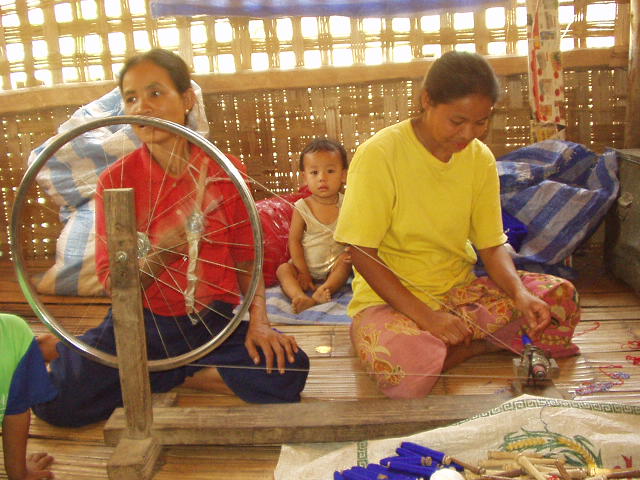 For a 3rd year Refugee Empowerment International will support WEAVE’s ongoing work supporting women’s capacity development among the displaced Burmese ethnic women along the Thai-Burma border. This support recognizes the United Nations, 2003 assertion that “the capacity to be assertive in society is particularly important for women, whose empowerment affects their lives, those of other women and those of their family” and that the “impact of an educated woman on her family’s well-being is consistently strong worldwide”.

WEAVE’s focus on women and young people ages 16 to 21 years old reflects the fact that their needs are currently not being adequately addressed. This target population is critical due the actuality of these women’s segregation from general society; the fact that women often play a critical – though often invisible – role in conflict resolution and peace building, and the reality that young people represent the potential leaders of tomorrow. The importance of this project lies in the fact that it, in part, addresses some of the effects of the inability of whole generations of ethnic minorities to secure their livelihood due to the insecurity, relocation and lack of investment.

There is also a real danger that without intervention the psychological effects of living under the military regime or in exile could result in an entire generation of Burmese people becoming passive, demoralized and unable to affect change in Burma/Myanmar. Critical thinking, analytical and negotiation skills, awareness of rights, and confidence- building among women and young people must be improved if they are to fulfill their potentials and participate in national society, culture and economy.

REI support will provide technical and financial assistance to the Women’s Study Program in Karenni (Site1), Mae Hong Son Thailand which provides 10 months of training to 30 individuals. This year in addition to its focus on the needs of women and young people of the Karenni (Site1) there is a need to extend the program to Karenni (Site2) due to the tight restriction on refugee movement imposed by the government.

Throughout its 18 years of existence, WEAVE has remained true to the spirit of its creation which was to provide timely, culturally- appropriate and relevant support for the refugee women and their children who are marginalized, oppressed, poor and exploited. Long before the phrase ‘women’s empowerment’ became fashionable, WEAVE worked to empower displaced and marginalized Burmese women through education. The strength of WEAVE has always been its closeness to the basic needs and issues that women are trying to address.

The Women’s Study Program (WSP), as the only women- focused program in the Karenni refugee camp (Site1), has been, in the last 2 years, instrumental in changing views and perspective of some women and men on certain issues like women’s roles, women’s issues (violence against women, domestic violence, reproductive health, etc.). Moreover, it has also created space for women both young and old to converge to discuss issues that affect their lives. The program also increased the awareness of young women on the great role that refugee-women have to take, in their personal, domestic and community spheres.

The Women Capacity Development program have been successful both in providing access to learning and education, and in raising awareness on women’s and community issues.  WEAVE aim for participatory learning to increase and support local interest in women’s and gender issues despite displacement. Strengthening informal working groups and networks have encouraged exchange of information and materials helping education and learning, and given the youth the possibility to learn from experienced community leaders.

This year WEAVE have highlighted these accomplishments:

“I am Soe Meh and I am 20 years old. I am now married with one child. My ethnic group is Kayan. The WSP opened my eyes and I now appreciate the need for more education to girls and women. I believe that with programmes such as WSP, more girls and women will know their rights and do something to protect and exercise those rights.”