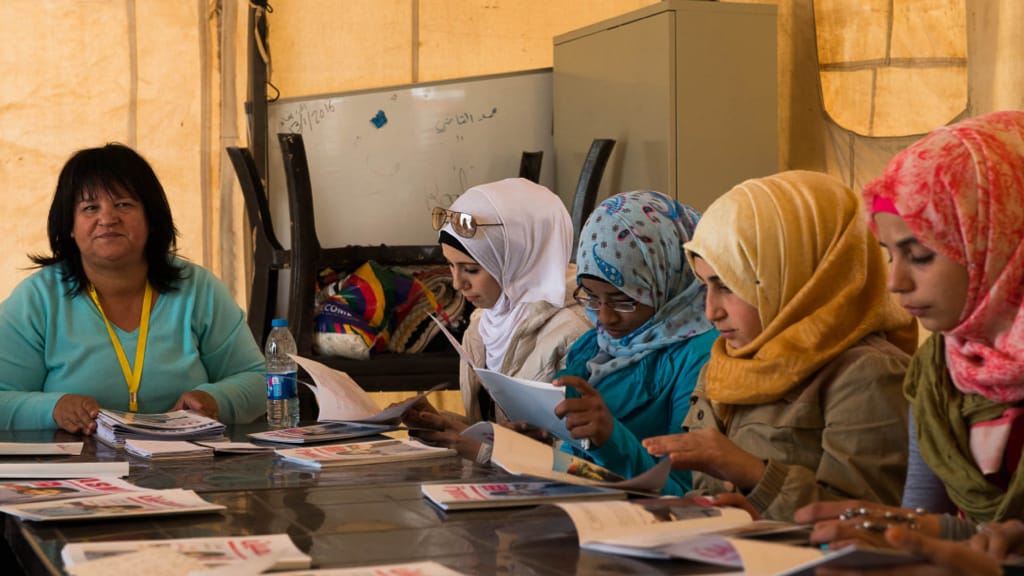 This project trained women in the Za’atari Refugee Camp in Jordan to contribute to the camps monthly magazine “The Road” as well as produce an issue exclusively by and for women. The training was done in 4 different workshops focusing on editing, journalism and design for two groups of 25-30 women.

“The Road” was a monthly magazine in the camp that is read by around 20,000 people in the camp and addresses issues such as health in the camp, the differences between Syrian and Jordanian school systems, updates on different projects within the camp as well as others. By having women contribute to this magazine and create their own issue, this project allowed for women to become role models for their children, learn skills such as interviewing skills, editing skills and writing skill, building confidence in the women and making the community stronger against being taken over by radical groups.

The Road was published within the camp from October 2014 with great success with 99% of the readers saying they enjoyed reading it. The camp itself is around 6 square kilometers and has been open since July 2012. There are around 85,000 people who have fled from the Syrian Arab Republic living in this camp and approximately 50% of the population is women.

52 women completed the workshops on photography and journalism and went on to create a magazine issue just for women called “Yasmin”. 3,000 copies of the 20 page magazine were produced and distributed between 14-16 March, just after International Women’s Day. The magazine allowed the women to discuss life events, voice their opinions and learn new marketable skills such as computer literacy and communication. There were unexpected results such as one contributor meeting a friend from home that she did not know lived in the camp.

“Knowing that “The Road” Magazine would start about a journalism course, I unhesitatingly came to participate as a volunteer because I like this job and hope to be a correspondent when I come back to Syria. In this course I have learned how to write a report, methods of interviewing, objectivity and credibility of piece of news. I have many friends now, and I read magazines and use the internet”.